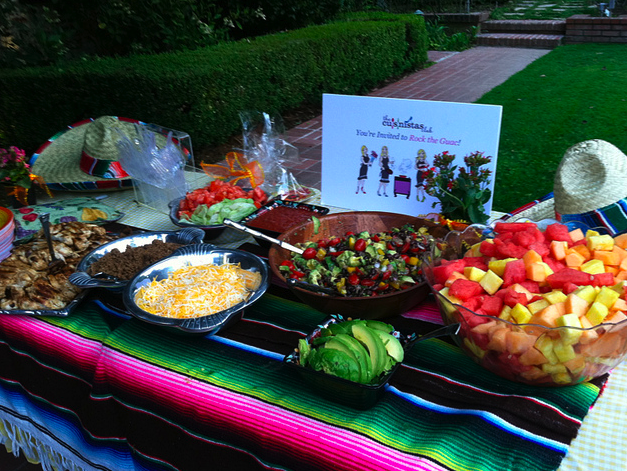 Wow that was HOT HOT HOT—as in 95 degrees! The LA Cuisinistas got together poolside to beat the heat and send summer off in style with The Cuisinistas Club’s “Rock the Guac”.

Festivities kicked off with the second annual Cuisinista Guac-Off where 3 strong contenders competed for the 2011 title- Kerry B, Kristi B and Sammy B. After 26 fiestalicious votes, Sammy B snagged the winning spot (and the festive entertainment platter prize!) by just 2 votes – it was so close – 10-8-8! And of course we have a prize for you—his winning recipe:

To complement the guacamole, we prepared a taco bar with grilled chicken and ground beef, lettuce, tomatoes, onions (and guac of course). The tacos were served with guacamole salad (thanks Samantha!) and mixed fruit. Everyone enjoyed mango, coconut, and strawberry popsicles for dessert on the Sunday summer night!